Personally, “unwritten rule” is a paradox on 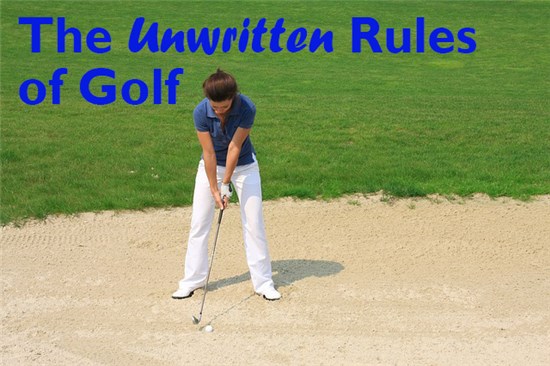 par with “soft rock” or “fun run.” But it got the wheels turning: what are some of golf’s implied customs? Here are the 10 most important items on golf’s unwritten rules list. You know, assuming there is a list. Which there’s not, because they’re unwritten.

Most golfers are cognizant of this etiquette. What most forget, or perhaps are unaware, is that this line extends past the hole. Give your playing partners five feet behind the cup when setting up to address your putt.

This often manifests in foursomes, with two players holding a conversation while another tries to hit their shot. Be aware of your surroundings, and that of others, on the course.

If it were up to me, inattentive, slow-moving golfers would be incarcerated. Or at the very least, booted from the course. Don’t be the jerk that’s setting back everyone’s schedule. And if you are advancing at a “downloading music on a dial-up router” pace, let the groups behind you go ahead.

Your cell phone could ring or tell me in detail about a proctology exam during my swing and I wouldn’t blink. Yet if I see your shadow move during my address, I’ll stare you down like Ron Swanson sizing up a Whole Foods. Keep still when others are hitting, and when you’re on the greens, move so your shadow is not in another’s line of sight.

The Golden Rule of Gimmes

Want to make things awkward? Make an opponent putt out a two-footer. That will light the coals.

Even if there’s money on the line, err on the side of being liberal with your concessions. A golfer should treat the putts of playing partners as one would like to be treated.

Be generous with the tips towards caddies

For the sake of posterity, we should define what “generous” entails here. A tip of $60 might strike some as lavish, but given a normal 18-hole round takes four hours, that sum should be the minimum. This is especially true for high school or college kids. Odds are, they need the money more than you.

One caveat — some courses charge a caddie fee upfront. In such a scenario, ask a caddie how much they pull in from that take before tipping.

Don’t give advice unless asked

It’s been said that “The worst men often give the best advice.” This does not carry over to the golf course.

In terms of rudeness, an impromptu swing or putting tip is more reprehensible than poking fun at another’s spouse. If a playing partner requests help, feel free to share your wisdom. But unless called for, keep quiet when it comes to golf counsel.

This isn’t courtesy as much as safety precaution. Forget three-putts; you know what will really ruin an afternoon? A concussion.

Everyone, including pros, are guilty of hitting a wayward ball. That can be forgiven. What’s indefensible is planting a Titleist in someone’s dome because you forget to give them the heads-up, literally and figuratively.

Putting is hard enough without having to navigate past potholes. The rule of thumb is to fix your own ball mark, as well as one more. Same with bunkers: the sand should be just as pristine as it was when you entered.

In short, leave the course in better shape than you found it.

Too many players correlate their enjoyment to the scorecard. That’s an equation for disaster. While it unquestionably feels better to play well than at the other end of the performance spectrum, there are worst tragedies in life than a bad round of golf. More importantly, don’t let any sour grapes towards your own game influence your demeanor to the rest of the group.

Because there are plenty of unwritten rules in life, but it’s a well-known sentiment that no one likes a jack***. 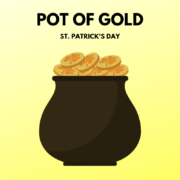 The Luck of the Irish!